The further misadventures of L. and I

In our ongoing quest to widen our horizons and enjoy life to the fullest, this weekend L. and I went to North Beach where we ran into some acquaintances. We hung out a bit but with the band playing a great mix of 80's rock and new wave, I left them for the dance floor. 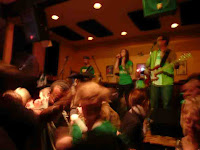 I was more than happy dancing by myself but somewhere along that evening I met a very tempting fellow who tried his best to seduce me. Despite his smoldering stare and his resemblance to Antonio Banderas I said no because he also looked like he was in high school. He showed me his ID to prove he was indeed legal. But he was still only twenty two. And I am...oh boy...

I then met another guy who bought me a very strong drink (on top of two other drinks, oo! what a mistake) and introduced me to his friends. After dancing with each of them in turn he then asked if I was interested in a menage a trois. What? I was too surprised to answer him. "I think that's a yes," he said smiling.

Taking refuge in the bathroom I had to laugh about all that had just happened. How far was I willing to go in my quest to savor life to the fullest? The idea of a threesome had never appealed to me. Then again I'd never had this kind of opportunity until that night. Then again I consider myself a good, moral person, my body is a temple and all that. Then again at the end of my life (a hundred years from now) will I regret not experimenting more?
In the end I did nothing more daring than to ask one of the acquaintances to go hiking with L. and I the next day. Unfortunately I also went to sleep without eating or drinking anything to settle my stomach and I woke up too sick to keep anything down. I should have stayed home instead but thinking of our promise to increase our circle of friends, especially male friends, and the hope that L. and the acquaintance might really hit it off, I forced myself to get ready.

I'd thought that the acquaintance seemed nice enough. But, while hiking in Golden Gate Park, I gradually got the feeling that I should have stayed home after all. Because I was hung over, causing L. and I to be an hour late, he kept teasing me about being a 'lush.' When I went to the ladies room he jokingly asked if I'd been praying to the porcelain gods. Then there was his general inability to hold a conversation and the fact that when he did speak it was only to say something cynical and acidic. To top it off, he had the nerve to joke that I'd not done enough to entertain him. Feeling the way I did, exhausted and not at all my best physical self, his joke and it's implication, that I was responsible for his amusement or lack of seemed the height of disrespect and immaturity. And I wanted to say, what the f---? You with the the pinched look of the perpetual complainer, there's nothing in the world that could amuse a bore like you. But knowing L., who sees the best in everybody, who calls herself 'shy' when she's really unbelievably brave, would tell me there's probably more to him than than the cynicism I saw, I held my tongue.

I read somewhere, maybe in a Deepok Chopra book or The Secret, that as a person progresses spiritually they often run into people and situations that test how much they've really grown. So here I am at this particular stage, (I think I'm) more positive, more at ease, more hopeful and content than ever before (or am I?). So perhaps it's no accident I should run into people who challenge just how open I want to be or how positive and clear sighted I really am.

Enough of that though. I had a great dinner with my girlfriends last night. Other adventures await. And Steve Wozniak is dancing on tv. Life is still awesome.