My way or the highway (to Hell) 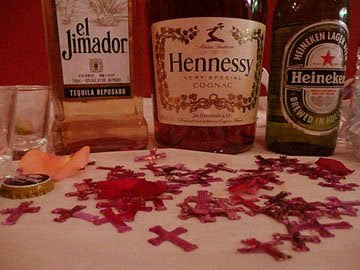 I usually know better than to open a certain uncle's emails, the ones he sends to the entire de los Reyes universe and beyond. Especially email's with subject lines like, Fw: Obama Fan or Not - Please Read. But I was multitasking, the dismissive fan barely registering and I open it. By executive order, (it starts) President Obama has ordered the expenditure of $20.3 million in "migration assistance" to the Palestinian refugees and "conflict victims" in Gaza.

The email goes on to review Obama's other heinous acts thus far as president including: 1. His first one-on-one television interview with any news organization was with Al Arabia television. 2. He ordered Guantanamo Bay closed and all military trials of detainees halted. 3. He ordered overseas CIA interrogation centers closed.

Now, it continues, we learn that he is allowing hundreds of thousands of Palestinian refuges to move to, and live in, the US at American taxpayer expense.

It gets worse. This wasn't just a rambling complaint. It was meant to rally support and signatures for a letter from Every real American to the president:

I have had it with you and your administration, sir. Your conduct on your recent trip overseas has convinced me that you are not an adequate representative of the United States of America collectively or of me personally.

My eyes swimming, I debate whether to forget the email and accept family as they are even if they're crazy. Or to tell mad uncle what I really think. After all, he didn't pen the letter, he just forwarded it. So I compromise by asking him to please stop sending me these emails because I find them hateful.

But I get another email half an hour later. This one reads, Fw: God, please help us. I know better, but I open this one too. What can it be now? I wonder. In it Obama's bill, HR 1388, or GIVE (Generations Invigorating Volunteerism and Education) is compared to Nazi Germany's Hitler Youth movement. And as I fume over the stupidity of it, a lifetime of other stupid things my family has tried to force upon me bubbles up to the surface. He may not have written it but I know he (and many of my other relatives) may as well have.

And so I click not Reply but Reply All. Then I write that I not only like Obama, I thank God for him because he's not the Muslim/immigrant/non Catholic hating, war creating, fake Christian hypocrite Bush was. Among a few other things I've always wanted to say.

A few minutes after clicking Send, I call my sister to tell her I've just ostracized myself from the family for a good five years, that they'll be saying rosaries and novenas on my behalf now, and might even come over to force an intervention upon me. "Why?" she asks. I tell her about the emails and as she argues how wrong mad uncle is and why, I get yet another email from him. This one, addressed only to me, reads, Holy Souls, a sermon on the gospel of John 10:1-10. "He sent me a sermon!!!" I yell. She asks what it says even though we already know what it says. But I skim it over anyway to confirm the fact that it is indeed a sermon warning me I have to believe in Jesus or I'm going to Hell.

We are infuriated all over again. What nerve! But we are amused also. Really amused. We joke about all the Christmases mad uncle has ruined with his sermons, the rosaries prayed on our behalf for one reason or another, the lectures, the looks. Good times.

"I'm glad I wrote it," I say. "It was worth it." But she warns me to be diplomatic in my response if I don't want to find myself being thrown into a van one day and taken to some Catholic safe house.

So I thank him for his concern, reassuring him I am still a Catholic (though maybe not his kind of Catholic) and I still believe in Jesus (though maybe not his Jesus). And I repeat my request he stop sending me these political emails. There, we agreed, diplomatic, I didn't try to argue with him, I didn't tell him he shouldn't express his beliefs. And now, since we are family, he and the rest of them have to accept me as the Obama supporter I am. Yeah!

So, as I attended the first communion of L.'s sister's goddaughter two days later, 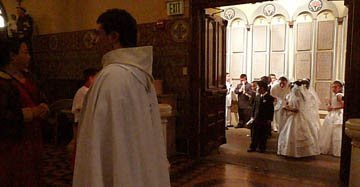 I couldn't help but laugh at how pleased mad uncle would be if he only knew I was in church that Sunday morning. And since the service was in a language I don't speak, Spanish, I also couldn't help but drift into a reflection on Catholicism. 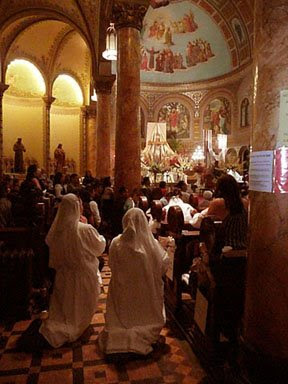 Truth is I rather like church. I like the vast echoey coolness, the beautiful, larger than life architecture, the smells of incense, flowers and burning candles, the music, and the rituals. It's comforting. I feel at peace there. This is what God is to me, this feeling of peace, and when I hear people like mad uncle spout their hateful stupidity I think they can't possibly be speaking for God. They can't possibly understand God either. And yet they say they do. And everything they say sounds topsy turvy. And makes me feel sad. My heart and my gut tells me one thing, and they tell me another.

I remember once telling a cousin of mine, who'd joked I'd probably skipped church that Easter, that I did go. I should have stopped there, but I made mention of the church I'd gone to, Grace Cathedral, because I didn't see why not. And he, knowing every Catholic church in the state, knew this was not one of them. So he lectured me about worshiping false gods because only the Catholic God is the real God. I should have known considering how many times he and the others have done this to me, but I was still flabbergasted. And though I tried to explain what I sensed to be true, that God couldn't possibly care about stupid things like that, it was like yelling at an orange. A total waste of time.

I won't end on that note though. Here's a photo I took during the blessing of the first communioners. Notice anything? If you've ever seen any of those reality ghost shows on cable tv, you might have heard of ghost/spirit/angel orbs. It's just dust, probably. But L. and I couldn't help giggling over how these specks of dust might actually be angels. It's a sign, a sign! A sign I know the de los Reyes clan would interpret as a warning from God to change my ways before it's too late. But I would rather hope it's a sign, or a wink, from God telling me, Everything's alright, Cheryl, and don't be mad because they love you. And maybe, As we bless these children we bless you, too, child of God. And that's all. 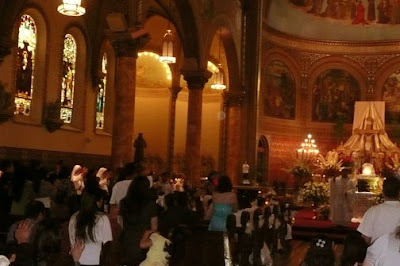 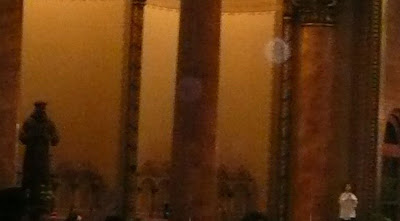