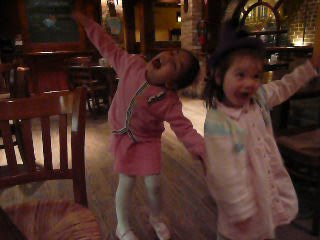 My sister & family is moving to Fiji in August and I am missing them already. Of course I will visit. But maybe not as often as I do now when they're just a five hour hop away. So I thought I'd share a few photos and videos in some upcoming posts before my nieces and nephews change too much on me.
This is Lili last year, at four. Note the slightly anxious look on her face (what number comes next again?) and the way her sister, Olivia, six, both helps and hinders her.

Here's Lili a few months ago, at five. Not so anxious about her numbers anymore, but sibling rivalry is still alive and determined.
In case you're wondering, this was a Friday night and the girls and I were playing sleepover, which meant a big bowl of popcorn, lots and lots of giggling and yet another viewing of Mamma Mia. Thank God they never asked me why didn't Donna Sheridan know who her daughter Sophie's real father was! Nor a bunch of other potentially awkward questions about the film I'd rather they posed to their mother. All they cared about was learning the songs and dance steps by heart and getting all the wedding details down so they could recreate it later. (That was very cute, by the way, wish I had pictures.)

My sister once accused me of favoring the girls over the boys. Understandable at the time (boys at nine and twelve aren't exactly sweet) but not at all true. When her first child was born I took a semester off to play nanny. And when I had to return to school the grief was like nothing I'd ever experienced before. And every time I leave I relive that grief all over again - for all of them - though, okay, maybe not of the same length and severity. But for a week at least I am a total crying wreck.

But in a way my sister is right because if I should only have one child I admit I would want a daughter. Maybe so I can give her the kind of childhood I didn't have. Or so I can give the world yet another strong woman. And sometimes when I'm with my nieces I see the things they seem to magically soak up from out of nowhere, like the need for girls to be pretty and pleasing even if it means subjugating their own needs. Which (on top of all the usual dangers one has to be aware of when one is responsible for a child) then reminds me of all the stupid things such cultural training can lead females to do to themselves. Things I have done. And I want to protect them from repeating my mistakes.

But unlike me these girls were born on rock solid ground and under a loving and watchful - but not overly protective umbrella. They are super smart, hilarious, bold, sweet, fearlessly expressive and some of the best company I know. I don't need to worry about them. Though I probably will anyway. 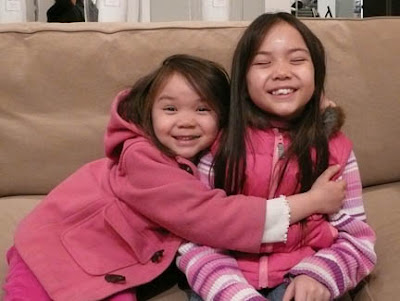