I am an excellent painter. Despite last week's failure's that is... 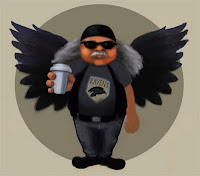 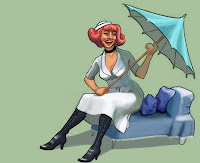 I could make them work if/when I paint over them. But...I need to move on to other things.
This one...

I'm more satisfied with. It's an older piece I'd originally finished with flat overlays of color. Because of course I didn't believe I could handle anything more difficult. This time I started with the monotone figures in the middle (easy peazy), then went on to the more difficult figures on either side (not so easy, especially the hands).

In my first semester of art school, my artist self still an eager pile of unmolded clay, I had the misfortune to have a rotten art instructor. One who, when I proudly handed in my final project (a watercolor painting I'd worked all week and all night on), eyed my work this way and that, hand on chin, before saying, without conviction, "Well...I guess you'll be an OK illustrator...one day." Well. I'm not one to cry in front of strangers (I prefer bathroom stalls), but after that parting shot from instructor dumbass, I bawled - crying out loud bawled - for five city blocks, all the way from school to the Powell Street BART station, on my way back home.

Later, I would face the terrifying Barbara Bradley. An icon from the golden age of illustration. Towards the end of each semester she would take each of her students aside, during non class hours, for a talk about their progress. Every student dreaded this meeting. Even the superstars (so they said). Because we'd all heard how former students of hers had been permanently scarred by this fifteen minute interview. Some, legend went, had even dropped out of school because of it.

My last name putting me among the first in line, I didn't have the build up of dread most of the others felt. Also I was too busy drawing all the time. So why did I still suck? That's the question she addressed during our talk.

Basically, it came down to me being too much of a tight ass. It looks like you don't trust yourself, she said. How could she know just from looking at my sketchbook?!!! But she zeroed in on my exact problem. I didn't trust myself. I didn't believe in my own abilities. Damn she was good.

It didn't help that I belonged to an unusually promising year of students. Among them were the future head of storyboarding at Lucas, future animators, art directors, story boarders, concept artists, etc., for Blue Sky, Pixar, Dreamworks, Disney, etc. Students who would go on to work on films such as Men in Black, Cars, Star Wars II and III, Madagascar and basically every major animated film since the year 2000. Studios were recruiting them even before we left school. And then there were students like me, students who, some teachers assured us, would inevitably bloom after graduation.

I tried hard to believe this. But the philosophy at the Academy was that not every student was meant to make it. The majority of you, one teacher told us, will not be working in the art field five years after graduation. So you better work your butts off.

And I did, determined not to be one of the majority. But when I languished in job after job, always waiting to take off but never quite leaving the ground, I began to wonder if I was fighting the obvious, that I was one of the majority who wasn't going to make it.

But now I see my mistake was to always take whatever job came to me first. One classmate of mine turned down Disney soon after graduating because the job they were offering wasn't quite what she had in mind - even though her remaining in the country depended on getting work. I thought she was crazy. But a year later she was hired by Pixar, to do precisely what she'd wanted to do all along, and she's been happy there ever since.

If only I could go back in time and talk some sense into myself. But here I am, older, wiser...

and starting to believe in myself at last.

Some free day at the Academy of Science sketching... 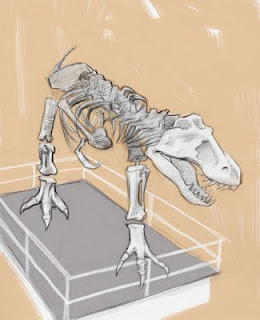 With the summer tourists gone and the kids back in school there were no lines to wait through. 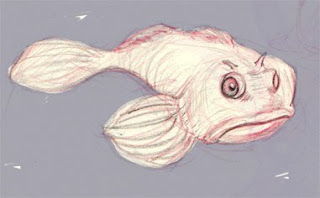 This fish stared at me the whole time I was drawing him. I wonder what he was thinking? The museum has been newly renovated, with lots of new aquariums - but no fish roundabout! So, even though I give the place a thumbs up for cleanliness and architectural design, it was missing something without that fish roundabout. The experience of standing in a gigantic room watching large fish swim round and round you made you feel like you were in their world, not the other way around. So, boo Academy of Science! What were you thinking leaving that out?!

Email ThisBlogThis!Share to TwitterShare to FacebookShare to Pinterest
Labels: Academy of Art University, Academy of Science