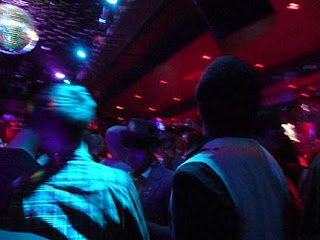 ...in a club called Fame for 80's night, L. and I had been feeling more stressed out than usual so it took us longer to get into the spirit of things. But after an 80 cent Cosmo, mostly ice, we were up and grooving. And after my third, thank God it was mostly ice, I was dancing on the stage having so much fun I couldn't remember what I'd been stressed out about. And though I had no expectations of meeting anyone, this being the Castro, I did dance with someone who said he loved me for having so much fun (and for being sexy, hee, hee) and if he wasn't gay he'd ask me to go out. L. later said that's what it's all about. Just have fun, don't worry and they come to you, even those who aren't into women like us. 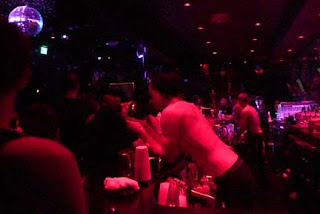 And letting life take care of itself. Stress, worry, trouble sleeping, these are in a way a lack of faith that life will work out in one's favor. And so we exert effort (stress) to make things turn out the way we want them to. Today, I was on the receiving end of an email lecture (I would expect you to...) from a friend who disapproved of my being a b---- this Sunday to the woman I consider difficult. This stirred up a lot of emotions, oh boy, sadness, disappointment...defensiveness. Hey, I really was trying my best, yes I know I brought her in so that's why, I love you, no problem with her being part of the group but please don't, not worth putting a wedge between us, to be fair you, so can you blame me for, I'm sorry...oh, drama, drama, drama!!!!! Underneath this argument were other issues, issues she and I should have addressed earlier. I'd been sensing a bit of blame for being the one to bring this woman, this poor annoying, needy, woman, into the group in the first place, as well as disapproval for my excluding her in most of my social plans, even though my friend has never said anything. And I've been feeling hurt as a result but have said nothing. Didn't she respect my feelings? Or give me credit for having legitimate issues with this woman, or more credit for being as civil as I usually am with her, or any credit at all for trying to transform my feelings rather than demanding we all kick someone most of us agree is annoying out of the group. The one time I....

But that's the voice of the victim again. Eckert Tolle says (I'm summarizing badly) so what if someone doesn't understand your point of view? Will it kill you? No. But it still hurts. In my second, and hopefully more coherent response to her I said this is how I feel, this is how much I can stand of this woman who even she considers difficult and can't take more than an hour of, this is what I'm doing to transform my feelings into acceptance, which I can't do any quicker than I'm doing right now. That's it. Stop disapproving, stop trying to make me feel guilty, and start being my true friend again. (I didn't put it quite that way but that's what I meant.) Other than that, I don't know what else to do or say about this issue so I'm leaving it to God. And trust that friends, true friends, are worth all the drama.