Fiji on the horizon It's official, my sister said today. Her husband, who works for the US state department, is being sent to Fiji (instead of Nepal which would have been cool too) for three years. And as she told me this I could not help but feel a twinge of separation anxiety. Maryland to California and back again, no big deal. I can go back and forth twice, sometimes three times a year. But Fiji...

Yes, but it's Fiji!!!!! Treehouse resorts, hours away from New Zealand, biggest city in the colonial south pacific, scuba diving... And though it may mean I see my sister and her family only once a year, I get to go to Fiji! I get to go to Fiji! Hurray, huzzah, hippie-aye-yeah, hurray!

On another note, L. and I went to El Rio last night for swing goth... 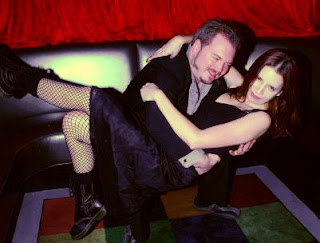 Yes, swing goth, or 'partner dancing with a darker twinge' according to the flyer. One of the strangest dance experiences I've ever had. Imagine partner dancing, 40's style, to Nirvana and Billy Idol. Weird, oh boy was it, but fun. And we met some very nice people there. People who asked for numbers...

It reminded me of Jane Austen, specifically the Netherfield ball. Would I rather dance with Mr Collins, Mr Bingley or Mr Darcy? For better or worse, a man's ability to lead during a dance does tell a woman a lot about him. Perhaps all she needs to know. For instance, if you make a mistake while he is in the lead - I repeat, he is in the lead - does he say something insensitive and stupid like, why did you forget...? A Mr Collins for sure. Or is he so experienced that even though you've never done this dance before he enables you to have fun while you're learning? Not quite a Mr Darcy (older, more sociable) but somewhere within the same range. And even if he is not so good a lead because he is learning the dance himself, is he so enthusiastic and polite that it's almost endearing? A Mr Bingley...almost. And unfortunately, I'm not a Bingley kind of gal.

Conversely, in Northanger Abbey, Henry Tilney compares dancing to marriage saying it's the duty of each partner to attend only to the other at least during the duration of the dance. I didn't always do that, but found my attention wandering now and again to other possible partners settling on no one in particular. So it's safe to say I'm not Catherine Morland. I'd rather be Elizabeth, anyway.

I'll end with a photo from El Rio, an amazing gypsy punk band I unsuccessfully tried to identify. They were so good, wish you could have heard them. 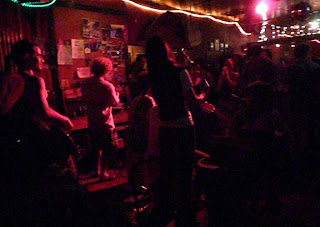