I've had nightmares every night this week. Can't remember Monday's but I did wake up with a start and had to take one of the anti panic pills the doctor gave me. Excellent stuff, I must say, but am trying hard not to rely too much on them. Tuesday woke up after a nightmare in which I'd been shoe shopping in this really nice boutique where I flirted like crazy with the cute sales guy. But as I was paying for my purchase and I was trying to work up the courage to give him my number, he suddenly seemed to lose interest in me because he'd seen that there was something physically wrong with me. Wondering what he'd seen I found myself in front of a mirror examining myself and I realized I'd lost a lot of hair on my left side (heart = left side = hmmm.). A neat row of it was just gone like it had been mowed off with sheers. Wednesday I woke up in a good enough mood to think I'd gone a night without a nightmare until later when the nightmare I'd had that morning popped back into my head while I was brushing my teeth.
I always have nightmares when I'm working through difficult issues. A few years ago, when I was on the verge of cutting things off with my brother, I dreamt I was flying through this black and white Sin City type place on my way out of there but before I could get away I had to find someone so I flew into a building, into this dark, dreary kitchen because someone in there needed my help. After an anxious search I found him and took him by the hand then lifted his sleeping or unconscious form into the air like he was a big sack of flour. Up and over the rooftops we flew while whoever it was we were escaping from slowly gained on us. And the closer this menacing figure came the heavier the man I carried seemed to be until his feet were nearly brushing the top of the street lamps and it took all my strength to keep him from hitting them which would have slowed us down even further. I remember getting so frustrated with him for not being able to help me, for his weighing me down and putting us even closer in harms way. Then I woke up.

Another time, when my father was still my number one least favorite person, I dreamt I was literally trying to escape from him by running through the horrible cookie cutter suburb we used to live in until I took off into the air and I was flying over a Pixar-like Irish landscape, a country so lush, vivid and breathtaking that everything else, all fear and hopelessness fell away, and what had started off as a nightmare had become one of the best dreams I ever had.

Last week my brother was the only person I told in person about my little heart troubles. He then told my mother who then told my sister who then told my dad (and an old friend who I was so glad to hear from) even though she'd sworn never to speak to him again. As soon as he heard he dropped everything and drove over to my place to see if I was alright. It really was heartwarming to see him so worried about me especially, I guess, considering how I spent most of my growing up years wishing he'd either disappear or die in order to spare us the misery that was his presence. Dad bought me groceries, took me to an excellent Japanese restaurant for lunch, then told me to drop my crappy health insurance for something better and not to worry about the cost cause he'll pay for it.

Tonight I'm hoping for more flying dreams, maybe one where I fly over to see the Northern Lights and because this is a dream I don't feel cold at all. Or maybe I'll fly over the Himalayas to see the Dalai Lama. Or both. 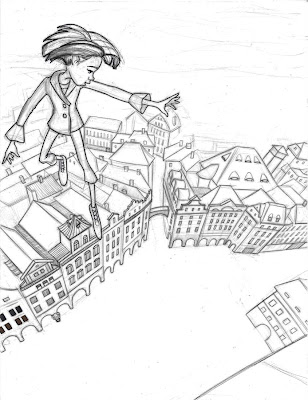 (Current work in progress. It'll be one of the illustrations in a book of illustrated short stories I'm currently working on.)
17 comments: