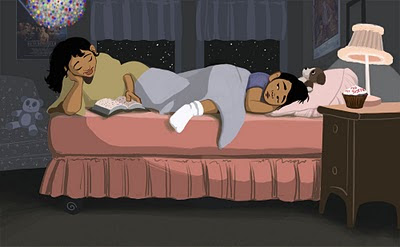 Since I neglected to pencil in ‘buy birthday present for sister’ this year, and then I forgot to call or email her on the actual anniversary of her birth, I have done this belated birthday sketch for her instead.
When she and I were growing up, older sister was my number one tormentor. The one who kept laying claim to my favorite toys, who forced me to play Darth Vader while she and her snotty friend Crystal got to be Luke Skywalker and Princess Leia, who convinced me mountains were the graves of giants then laughed at four year old me for my naivete and, worst of all, who stuck me with that stupid nickname which older members of our family still insist on calling me. Teyel. A word which makes no sense whatsoever and sounds a little too much like tail. As in, there’s Cherry followed by her little tail—oops, I mean sister.
When my sister and I are fighting, these and many, much more horrible incidents of torment are what I used to (and sometimes still do) remember. But then, when she’s at the other end of the country, or, currently, somewhere in the south pacific, I think how differently I might have turned out without her.
After our mother left and our father was finding even more ways to be erratic, illogical and frightening—living with him was like living in some Alice in Wonderland nightmare world where parents did not make sense, parents were forever changing form, parents could be truly dangerous—he, for some reason thought it would be a good idea to pass out on my bedroom floor night after night or even, once or twice, on my bed. If I’d been in a less traumatized state after the loss of my mother, I would have been able to fend him off better. I could have put into words exactly why asshole father should not do this. Not that he would have listened.—And not, I have to add, that my father was a child molester. But to lose my mother and then to realize this—this brain half gone asshole of a father was our sole parent now—was not, to put it mildly, at all comforting.
It was then of course that my formerly number one tormentor became my number one protector and best friend. My sister, without my asking her to, stepped in by inviting me to play sleep over with her. She’d read to me from a book of Grimm’s fairy tales night after night, a comforting ritual, until it was safe again to sleep in my own room.
So that’s what this image illustrates.
Happy birthday, Cherry. Love ya!
24 comments:

This isn't the post I planned to publish. I was working on another but got stuck on how personal it kept getting. Certain things like having to see people now and then who I may need to mention for a post to make sense is getting in the way of my freedom of speech. Not that I want to talk about them specifically, as in gossip, but one friend of mine asked I not blog about her ever. She wasn't too clear on whether she minded an alias or not so think I found a loophole. Then again I have the feeling she would mind even with an alias. How silly is that? So how to discuss something which kinda involves this person without mentioning this person? And, oops! Here I've mentioned her already when she specifically asked me not to! Darn. Sorry, friend I can't mention! Hmmm...ok, am working on this.
Anyway, goth painting number one is done. Or rather I have finally given up on it... 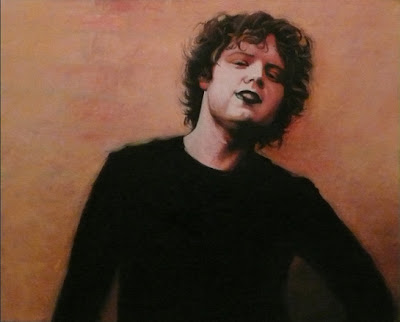 And if you must compare, the original photo can be seen on my photo blog here. Sad thing is, I chose to start with this one because I thought it would be the easiest, quickest one to paint. Little did I know it would take six frustrating weeks to finish making me wonder many a time if I might be visually retarded.
Goth painting number two, also, is under way... 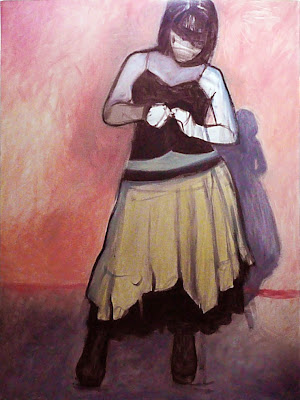 It's still in that yet to be messed up stage. Luckily, after six weeks of oil and brush practice, I'm hoping this won't take me so long.
And, inspired by De Campo, I too have begun planning my Christmas list. Look here and try to resist this c(h)andelier of dreams! 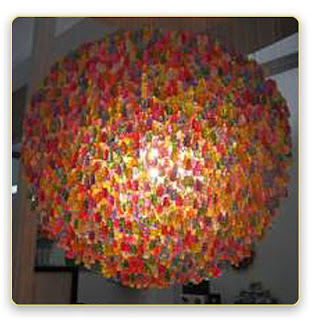 It's by Jello, who will make only ten of them, each consisting of about 5,000 hand strung bears and taking about two months to complete. It's a childhood wish come true!!! As kids my sister and I used to play space-ship-eat-all-you-want (because we couldn't in our house. Not because there wasn't enough food around but because our parents didn't want us, or rather my sister, to get any chubbier than she already was. I usually got full after two bites *unless when eating desert.) made out of all the boxes we could find in the house (again not because we didn't have toys but because boxes are just fun) on which we drew magic space ship buttons for all the only for special occasion goodies we could think of, banana splits, sundays, donuts, chocolate and strawberry shakes, french fries we (my sister) didn't have to share, etc. Anyway, imagine my disappointment when I read the fine print and realized that the gummi bears are not actual candy gummy bears (WHAT?!!!) but mere acrylic impostors. There goes my fantasy of snacking on my c(h)andelier some drunken evening. 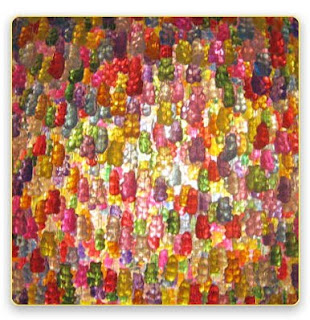 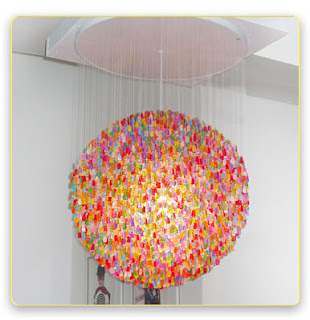 Or maybe I'll get it for my sister?
One last thing. Found this on an old Academy classmate's blog (N. Stapley)... 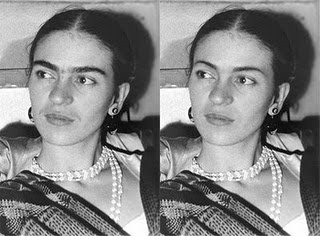