Some imaginary shopping then on to other things 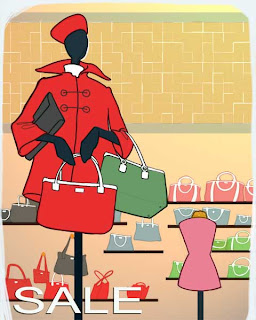 On to other things, I'm recovering from a mild case of bronchitus and instead of taking things in my stride I've been busy making a lot of trouble for myself by feeling this is not fair, I should not be feeling this way. And so the resume I've been updating has become a testament to my disappointing career, all the things I'd planned to do by now and didn't. A news report connecting Asians who turn red from alcohol (like I do) and an illness I'd rather not cope with has had me lamenting my heritage. Having trouble falling sleep because of coughing, reason enough to wake up in a bad mood.

Then there's people who've hurt us in the past, people who are so wounded they're always ready to strike, and are still around to potentially hurt us again. There's a person like this in my women's circle, who I myself brought in because I felt sorry for her. And by the time I realized how toxic she could be she'd already become part of the group, bringing into it an element of competitiveness and judgment not there before. I'd brought an office friend, a frenemy, into my comfortable circle of support. But trying to give her the benefit of the doubt and knowing she wanted to be taken seriously as an artist, I tried to help her as much as possible. I introduced her to the owner of a gallery I myself hoped to get into. After telling me (for the second time) he liked my work and might include some of it in an upcoming show he then told her, as gentlemanly as possible, that hers was not quite right for his gallery. She argued with him for ten minutes, looked around his gallery, then argued with him another ten minutes. And though I tried to make her feel better at the time, I also sensed (but tried to tell myself otherwise) that she hoped I wouldn't get in either. (I didn't, quite possibly because I came in there with her.) Still, I've learned to (reluctantly) accept her as part of the group. We'll never be close but we can at least be civil to one another. But Monday, during dinner with nearly everyone, feeling tired and cranky, I had to practically pinch my forearms to keep myself from shouting, shut up! shut up! Shut the f---- up you self absorbed b-----. I've heard these stories how many times now!? Shut up!

Was this the bronchitis speaking? Or a lingering resentment towards someone I'm working to develop more compassion towards but who I too often instead think of as a difficult and monumental b----?, I have to say I'm not sure. According to Judith Orloff the point of having emotions is to learn how to transform them. Frustration into patience, anxiety into calm, fear into courage. I have to remember that I learned to forgive my father who did and said far worse things to my siblings and I, always deliberately, than anything this woman has ever done unconsciously. However much he hurt me, I got over it. I healed. And I am who I am today thanks in part to him.

So, I confided these lingering bad feelings I still carry, along with my other worries, to L. yesterday. I felt embarrassed and a bit ashamed to admit to them but she only said (and I'm about to cry here) that I'm a friend she will carry in her heart forever. No telling me, oh, get over it already. No judgment whatsoever. Just love, support and respect. Then she treated me to dinner.

My circle of support remains unbroken. Thank you L., I love you, too.