Yet more (mis)adventures for L. and I

Wednesday L. and I, at the suggestion of our friend who I'll refer to as Mr Party (all the time), went to our first gay bar in the Castro, complete with gogo dancers on a tiny stage ... 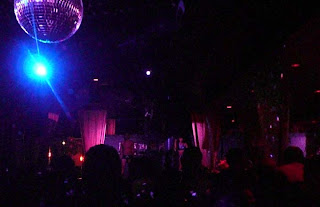 This prompted the discussion would we have a menage a trois if a woman was the third person? Answer : yes, but only if we found the woman attractive. No such opportunity happened to us that night (would we really have done it? I don't know) but Mr P was offered (and refused) some cocaine, an offer, he said, he got a lot. Why? I wondered. At first glance Mr P does not look like a Mr P. He looks, to me, like a lawyer or an accountant. The sort of person (duh) who can afford a little cocaine appetizer to go with his vodka and cranberry.
Friday, we did another pub/club crawl (Atmosphere, Rhy, that place in North Beach again for 80's night) 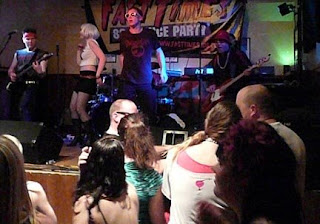 and who should we run into (at Rhy) but the notorious acquaintance a la Golden Gate Park hike/Mr Constant Complainer. I'd hoped never to see him again but he joined our party of two nonetheless. (Quelle menage a trois.) Fine, I thought, he and L. can hang out while I enjoy the dance floor. But he suggested dinner (pizza, Steps of Rome, North Beach) so of course I was obliged to converse with him. And I have to say, no, I'm glad to say L. was right about him...and I was wrong. Oh, yes he still carried his little rain cloud, still tried to 'mess with us' in his perhaps clumsy attempts at dark humor. Is it, we wondered, a defense mechanism, an exterior protecting his delicate insides? In any case, because I wasn't hungover and therefor able to reply and retort to the best of my abilities, I didn't dislike him as much as I did before. Good for me.

I wish I had more weekend adventures to report (why? Is two not enough? The busier I am the busier I want to be) but I'd promised myself to get my resume and portfolio (printed and online) in order this weekend (am sending it off to Pixar this week). And after spending an entire gorgeous and warm Saturday indoors my resume is, for now, updated. I must admit I've always been a bit touchy about it. Unlike many of my former classmates I can't list Dreamworks, Lucas or Disney there (yet). Just small, unknown or now defunct companies as well as jobs I'd not wanted to do but did anyway to pay the bills. But after finally giving myself credit where credit was due and adding relevant accomplishments I can appreciate my professional past and am rather sad I didn't before. My resume screams creativity, enthusiasm, determination and skill. So I hope it's only a matter of time before I join the big leagues.