Friday, my buddy in crime L. and I went on our weekly sojourn into SF nightlife. We met several nice people, one jerk, witnessed scary lesbians in a riot (because we ended up at the gay bar Fame again), had fun dancing and saw some really interesting art at 111 Minna which I thought I'd share. I don't know anything about them other than their names, but my guess is the artists all have some illustration or animation training. I'm envious of these works, though. I want to take my work in that dream-like, comic bookish, Egon Schiele-esque direction too, and am finding I have to fight against my inclination to make things as realistic as possible. But if it wasn't a challenge I'm sure I wouldn't feel the compulsion to go in that direction.
Anyway, here is Mateo. 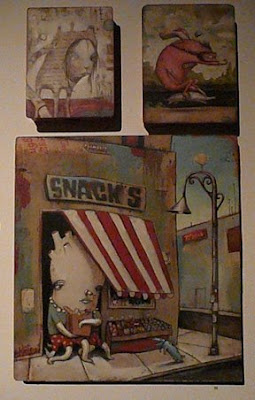 Is this woman suffering from writer's cramp? 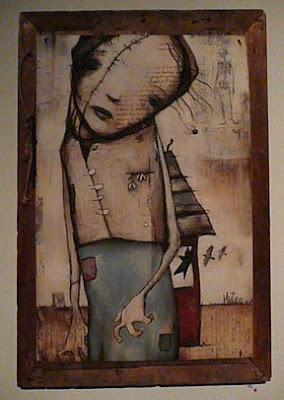 Is her head threatening to come apart with all the words stuck in her head, making it heavier on one side so she has to walk in that funny way? Then I'm pretending she's walking away from her computer in that tiny shack behind her, walking towards a beautiful clear lake where the man of her dreams will massage her cramped muscles and feed her strawberries. Hope it makes her feel better. 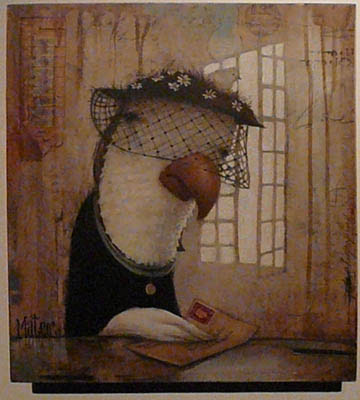 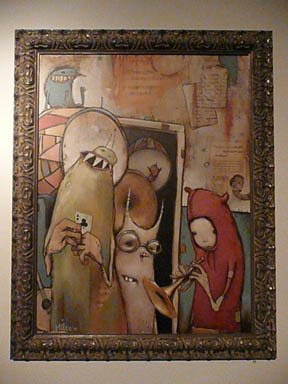 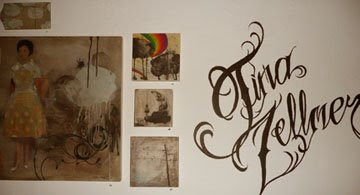 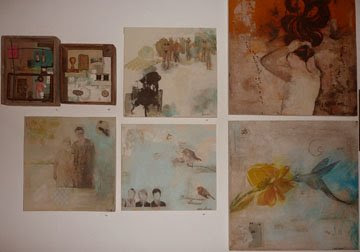 Erot. I love the cardboard 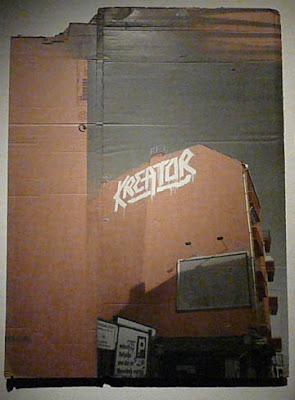 and duct tape. It was also quite sturdy to the touch (I didn't hurt it, swear!) so I'm guessing he (she?) used acrylic paint with a good layer of clear glazing all around to protect the surface. And if I were to review the work like a critic, I'd say the artist is making a statement on man's fear of death by using ephemera (or trash) as his (or her) working surface thereby making something meant to be thrown away or recycled into something he/she hopes will be preserved forever. (Good luck, artist!) He/she also makes good use of normally overlooked surface details (heck, the whole thing. It's trash isn't it?) by blending them into and allowing them to contrast with his/her exquisite and highly realistic images, et cetera, et cetera. I especially like how he/she spells creator kreator. Very klever. 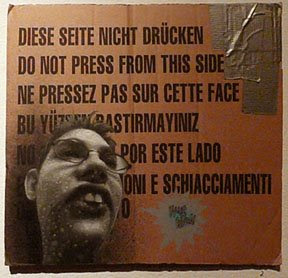 The name of this artist is on the lower right hand corner. Can't make it out? Me neither. 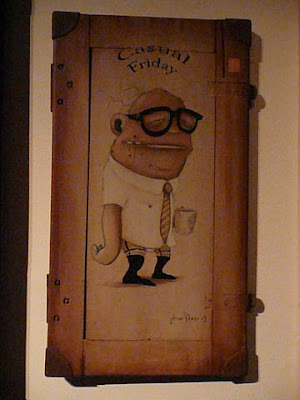 Do you ever feel like this guy? The one down there, I mean. 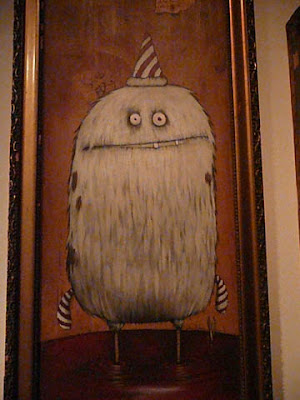 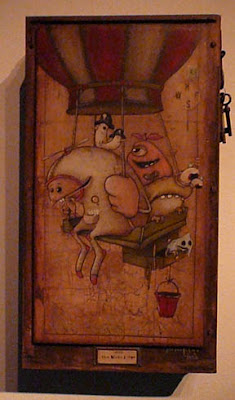 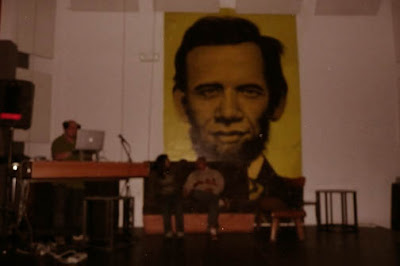 Finally, I know this is a horribly grainy photo (I had to use a flash in near dark conditions) but who do you see in the giant portrait? (Part of the photo, with better lighting, can also be seen in my May 5th The secret of happiness is... post) Hint: it's not Lincoln.