Happy Mother's day to all those who are mothers, have mothers, will one day be mothers, or in any way share in the upbringing and welfare of a child. For this occasion I considered sharing old photos of my own mother and my siblings and I, but old photos tend to bring up bad memories. So I rifled through my computer instead and compiled some of my favorite photos of my nieces and nephews.
I think my sister is a great, great mother. And even though during visits, with the bickering and screaming and horsing around, I at times think, oh my God, these kids need to be put in a zoo, I suspect she and her husband are doing everything right in order to ensure their kids will be well adjusted, confident and happy men and women one day...

(the kids last summer in Muir Woods and Disneyland.)

because her kids genuinely enjoy each other's company...

(1. the girls goofing around while my sister and I try to enjoy afternoon tea. 2. & 3. the girls playing dress up. No. 3 wants to be a cowgirl, an architect - so she can build herself a pink house - and a rock star...all at once! She once explained how she'd manage this...she'll do her cowgirling in the morning, her architecting during the day, and be a rock star in the evening. You go future cowgirl/architect/rock star!!! No. 4, 'baby happy face,' is a riot, one of the funniest human beings I've ever met, and she's only five! When she grows up she wants to live in the house next to her mother. My cartoon icon up there, btw, was based on her. And the universally adored no. 5 loves puppies. Any animal be it monkey, squirrel or cat, is, to her, a puppy. The family dog has learned to stay out of arms reach of her for fear of being squeezed to death.)

and feel safe expressing their complaints, or sneaking just one piece of candy before dinner, or shining like little stars...

(Latest on no. 5 is she's the naughtiest, rottenest one of the bunch. I found it hard to believe that this tiny package of overwhelming cuteness could in fact be a demon child but my sister provided many graphic examples to prove her claim. And I thought, well, if I were there she wouldn't be...OK, maybe not, but I like to think so anyway.)

they take care of each other without having to be asked...

(1. & 2. the oldest keeping an eye on the youngest during trips to Philadelphia and the Hudson River Valley. 3. The youngest discovering she didn't want to play in the waves after all. "Baba big!" she kept crying.)

and, even though they're part of a large pack, they're still nurtured and recognized as individuals. 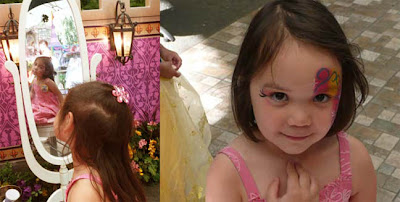 (The girls getting the princess treatment in Disneyland. The first photo reminds me of Rockwell's, Girl At the Mirror.)

(The oldest wants to be an oceanographer so my sister treated him to a scuba diving lesson in Monterey. 3. The boys in Philadelphia. 4. No. 2 goofing around at the Smithsonian. He wants to work at WDW either as a monorail driver or a vet at the Animal Kingdom, and have lots of kids - but no wife! Because girls are gross.)

(No. 2 with his 'little brother' days after the puppy's cast was removed. He'd been attacked by a bull dog, suffering a broken jaw and front leg and was nearly put to sleep because his vet fees were more than my sister could manage. A last minute good Samaritan saved his life by paying half his vet fees, then refusing any repayment. The shithead bulldog owner, btw, refused responsibility.)

I look forward to being as good a mother as my sister is one day.