The secret to happiness is... 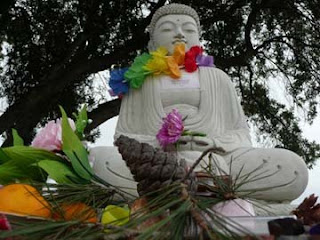 Feeling the way I did, restless, impatient, and vaguely angry about certain things but really nothing in particular, I was touched nearly to tears. I pictured maroon robed monks from the local Buddhist center putting this up for constantly getting lost people like me to find. That's all I need to remember, I thought. The secret to genuine satisfaction in this lifetime, today is absolutely today... 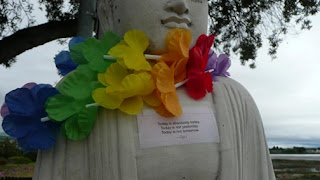 which I of course forgot as soon as I turned on the news back home. And I had things to do, like this drawing workshop in the bar/gallery at 111 Minna... 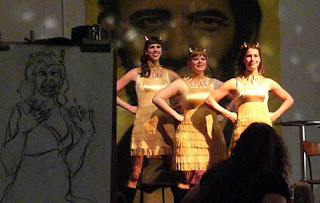 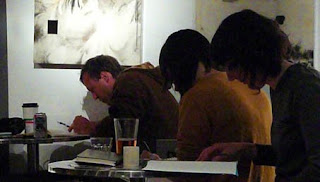 Drawing and beer! Well, not for me because beer + drawing = bad drawing. And the chance to see old classmates and people I'd once worked with. It was comforting to see how little we'd changed: we looked the same; we dressed the same; the shy guy was as shy as ever; I was still a goof and a flirt. All this was familiar, but troubling too, somehow. Even more troubling after I talked to the shy guy about people we both knew. So and so, who I remembered as one unhappy guy, was now in Baltimore with a great house and job...but was still unhappy. Several more were, like me, temporarily suffering the effects of the recession. And he, now that he was a published artist and could do as he liked, was he happier now? "Well," shrugged shy guy, "now it's just like any other job." He had his reasons, of course. He wasn't doing so well that he could live wherever he liked, for one. In fact he'd just moved to a place he was not at all happy about moving to. But I couldn't help wondering...is it because, nine years ago, he was just like this, getting by, not quite thrilled with his life, not quite miserable either?

At the Academy, I remember, some of the instructors seemed like eternal boys and girls who'd married art instead of another person, and the marriage wasn't a good one. And I'd think I will not end up like that. I won't always struggle to get by, won't be forced to teach when I'd rather create, won't get burned out. I'll get married and have kids. But here I am. Not that different here than I was there. And trying not to panic about where I'll be in five/ten years. Not, I hope, still struggling, still single, still a goof and a flirt at an age when I should be developing a Georgia O'Keefe-like grandeur. What, I wondered, am I doing wrong?

Course if I'd remembered today is absolutely today, yada, yada, I would not have felt the overwhelming need to go to the New Living Expo (where New Age-y folks of all kinds gather once a year) hoping to get reassurance through cheap psychic readings. But I did, and I went. Here's a summary of my readings -

Psychic one, also a massage therapist. The second after he starts running his hands over my back he says, whoa! what's this?
Me: er...a knot?
Psychic: are you in a relationship? looks like you've been doing what someone else wants you to do and it's costing you.
Thinking, wow! he really is a psychic, I spill about being pressured into going to a party I did not want to go to (because the party was given by a certain woman I consider difficult). And how, after giving in (and being extra nice to the difficult woman), I felt my efforts had gone totally unappreciated by the friend who's been pressuring me the most, even giving me an e-lecture about it a while ago. And this, of course, has left me feeling confused and angry and wondering if my e-lecturing friend may not have deeper issues with me. But he's not listening because some woman's telling him something. I'm starting to get mad because his time is costing me money.
Psychic, getting back to me: You see visions don't you?
Me: er...I guess. (I am a visual artist after all. Then again, sometimes random images or scenes do pop into my head, images that later sometimes come true...)
Psychic: I can totally see that!
Me: Really? (how?)
He told me the reason my life seems so difficult at the moment is because 1. I'm an old soul who chose to reincarnate into a particularly difficult life and family situation in order to learn certain lessons. And 2. I haven't been developing my psychic healer gifts. And until I align myself with my true life purpose I'll have a difficult time of it.
Me: How, how?
Unfortunately, our time was up...

Psychic two recommended more laughter, more funny movies. She also said, 1. I've been waiting for work to come to me. 2. The same applies to my love life and men I'd be interested in can't tell I'm interested. I couldn't argue with 1. since, technically, I work for a creative agency, one that so far, has had no work to give me. But 2? I'm a flirt! I wanted to tell her. You should see me at those drawing workshops flirting with all those shy guys I'm not interested in. Oh...I see.

Psychic three I at first regretted wasting money on because she said, 1. a pale haired, pale eyed man would enter my life soon but the relationship will not last. 2. I would meet my husband in January. Then she ended her reading with the offer to change my energy (and thus get everything I want) for another $400. What bull! I thought. Where'd she pull all that out of, her a--? Then again she did say some things which struck me as (sad, but) true. She said 1. I'm a hard worker, and have worked hard my entire life...but I have nothing to show for it. 2. Any relationship I enter into right now will not last nor be good for me until I take care of my employment issues.

Psychic four more or less echoed two and three, except she added that my lack of work had mostly to do with the economy. She also recommended I rewrite my resume because it was too broad, too unfocused and potential employers can't tell what I'm best at. But then I asked her why there was so much friction between my mother and I. "She's enraged," she said. "Really enraged." She went on to say that my mother and I have had many lifetimes together and in some of those lifetimes we've actually killed each other. This didn't ring true (or maybe I don't want it to be true?) but I thought trying her recommended healing meditations couldn't hurt either.

Were these psychics genuine? Any reasonably observant person might have come up with the same information they came up with. In an acting class I once took, this fact was demonstrated to us when the instructor had us take turns doing nothing more than say our names as if at an audition. And the amount of accurate information we were able to guess about each other was impressive.

Then again, I've seen and experienced some strange, strange things, inexplicable things that have forced me to conclude that there just might be more to this world than what we normally see. But does it matter whether we believe in this unseen world or not? Many people get on perfectly well without giving it a second thought, as my no nonsense sister is proof of. But back to my main point...

Hmmm, doesn't seem to matter now. I just want to go out and enjoy the rest of the day. So I'll end with this painting I ran across last week. (Sorry, forgot to record title and artist.) Normally I'm not drawn to abstract art and yet this work I really love. That's change for the better, isn't it? 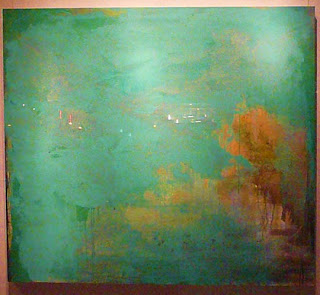