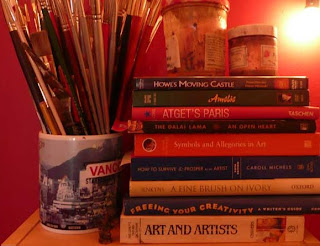 It's been raining the last three day and I've been guiltlessly living up to family fears by lounging around in my pajamas. That and eating lots of chocolate, surfing the internet, trying new recipes, talking on the phone, and dancing to club mixes on my Ipod. Oh, and doing some drawing, painting and writing too.

So it's unfortunate my family calls this doing nothing and I call it working. Thus, I avoid them when possible because the more nothing I do the more work I get done. To them work means going somewhere from nine to five. That's doing something. If one wants to stay home all day to do nothing one gets married and has kids. That's the way to do it. Then one can do as much nothing as one wants.

Work is worthwhile. Art, i. e. doing nothing, is not. Course, if I start selling work for $5000 or more, and so on, then...then I'll be one of the few who beat the odds because everyone knows artists don't make any money.

For me, being an artist is the greatest job in the world when I'm away from those whose seeming role is to make me feel guilty about being an artist. Even though I've learned to let most of what they say go in one ear and out the other. They're doing what families do, making sure their genetic material continues on as securely as possible. It's comforting, really. They're looking out for my future children.

Still, with the annual Easter reunion coming up, and single me not having gone to church in I don't know how long, on top of everything else, I'm thinking up excuses not to go. Maybe...maybe...an interview at Disney Studios Monday morning? Who knows? Maybe tomorrow it'll be true.