High and low, near and far 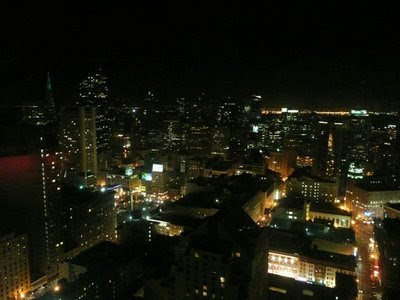 Friday night L. and I danced in the sky. The 46th floor of the Hilton, that is. Because L. and I are on a quest. The quest to find true love, career satisfaction and full self acceptance at last. So of course a place pervaded with deafening music, alcohol and misleading darkness, not to mention the alarming number of men who think an acceptance to dance is the same as saying yes a casual f--- (hello, some respect, please) yes, this is the sort of place we go to every week hoping to make a meaningful connection with the ones we might have been fated to be with. No, not really. It's just fun, occasionally flattering (occasionally not) and it keeps us in the habit of staying open to possibilities. So that when we are standing in line for coffee and the guy in front of us looks promising we will, by force of habit, flirt for God's sake. Instead of doing what we've been doing the last few years. Playing it safe. Somehow licking our wounded, bleeding hearts had become playing it safe. But no more! Because, like I said, we are on a quest. 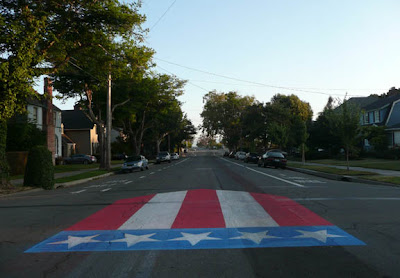 This photo (Grand St., Alameda) reminds me of my rather forlorn Fourth of July. 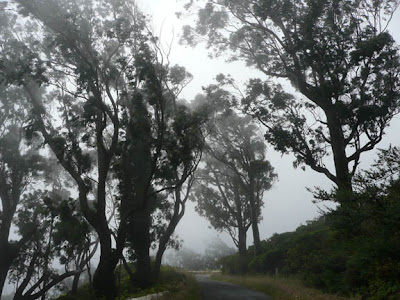 I took this photo during a group hike in San Bruno last Thursday. With the fog turning the trees into enchanted tree spirits and the strong wind causing a sad and eerie moan all around us, I was relieved to get to the other side of this high hill to see this... 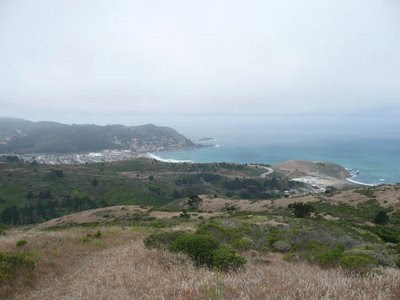 Alameda again, a near half moon and a far away full moon. Isn't that neat? 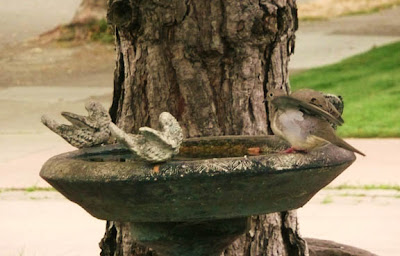 Alameda, yet again, a bird bath down the street from where I live. The real bird suddenly taking the same shape as his stone neighbors just took my breath away. A moment later it was standing on one of their heads.

The writing (in my imagination, anyway) is going well. I was in a cafe Sunday meaning to make a good start. I had my laptop, my coffee, everything just so. On pleasant afternoons I love working in cafes. Somehow, all the activity around me makes it easier to narrow my focus. (Mornings, as I slowly wake up, I prefer the comfort and quiet of home.) But this afternoon I just sat there staring at the screen. After a while I typed out a few words which I knew I'd later delete just so I wouldn't feel so idle. The trouble was even though I could see and hear the whole story more or less, including the ending, the beginning still eluded me. And I need, or I prefer, starting with beginnings. So, I worked on some sketches instead. Then, wouldn't you know it, I was walking to my car and the story's beginning suddenly played out in full.

Stories, I guess, are like potential future husbands. Easier to find when I'm not looking for them.