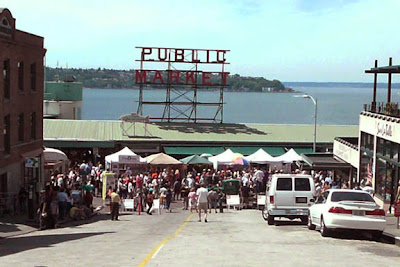 Well, actually I got back a few days ago, but after five and a half days away from the familiar, and having enjoyed every minute of it, even the two nights of insomnia (because at least I was sleepless in Seattle, ha, ha. Well, not really ha, ha but had to get that one over with anyway) I wasn't too eager to return to the old routine except to try to catch up with some of you folks before my post vacay mind forced me to give up. Had we met in person I would have just sat there in contented calmness, sipping my coffee, nodding now and then and not making much sense when I speak. Ahhh, vacation....
It had taken months to slip into the hyper, uncentered state I was in before I left. Boredom, the daily search for work, and the not selling of work, kept chipping away at my natural love of life making me vulnerable to feeling unwanted and useless. After a while reminding myself I have unique and valuable skills which took years and a small fortune to acquire meant nothing because on a primal level (despite an entrepreneurial mother willing to pay top $ for minding the phones and other such menial tasks. Thanks Mom!) I sensed my very survival was at stake. A hard winter might be coming and my stores are nearly depleted. Besides that it's like suffering from unrequited love. I love art. I have committed myself to the creating of it. So why, for goodness sake, could it not love me back just a little bit more?

On the other end of the job spectrum there is my perpetually overworked friend L. feeling trapped in a job she neither enjoys nor sees any point in. She knows something is wrong, something is off. But she doesn't know what to do about it.

So we escaped to Seattle to get away from what had become the dreaded normal. We were untethered, wandering here or there, eating here or there, continually amazed by new sights and sounds and not wanting to miss anything. Tired souls on vacation.

And now we are home. I am sleeping well (knock on wood), have new paintings in the works which I'm very excited about, and am seeing some small movement on the career and gallery front, finally (knock on wood, encore). All, maybe, because I took a much needed break.

(P.S. vacation photos to come. - Who doesn't love other people's vacation photos?! - Should I include the one of me riding the electric bull? Hmm....)