Seattle part one: coffee (and donuts)

I meant to post this first thing yesterday morning. But, a job interview at a small start up on Monday, followed by a Disney rejection on Tuesday, then a rejection by the start up on Wednesday (double ouch) and finishing this got pushed down the list as my after Seattle glow flew out the window.
The worst thing was I didn't get the job because I wasn't familiar with Facebook games, which they produce. And for weeks now people have been telling me I should set up a Facebook page. And every time I would say, but I already have four web sites to maintain. How could I know they were actually giving me vital hints from the career gods? But it's not as if I couldn't familiarize myself with Facebook games in a hurry, with a paycheck at stake. It would be like my first job out of college. I was hired to be a Flash animator even though I'd never used Flash in my life. But with all my other skills, they assumed I'd learn the program soon enough. I learned it within a week.

But I'm not resentful. No. Because I watched Oprah today. And she, in that a-ha moment kind of way, said, everything is happening to teach you more of who you are. And, it's always going to be OK. I also did some therapeutic painting, the kind that just comes together on the canvas. I love when that happens. And I am a damn good artist. Damn them. Damn Disney. But now I'm wondering...maybe I am meant to be more of a painter than an animation artist? Maybe. All I need is one really good gallery. Instead of the crappy one representing me right now - which I am grateful for of course. But I must say it doesn't feel like they're trying very hard to sell my work.

And yet I still dream of working for a film or animation company. I dream of working on the kind of film that becomes a classic, a great work of cinematic art. And of being so excited to be working where I work that I can't wait to get there each morning. So maybe I should be glad I didn't get this game job. And I should keep sending out the resumes. 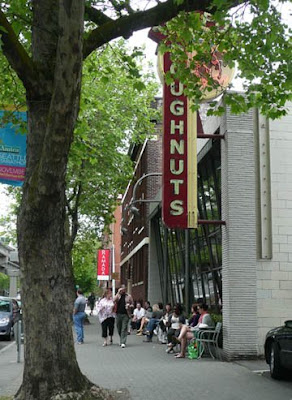 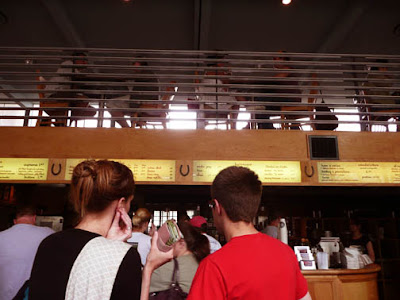 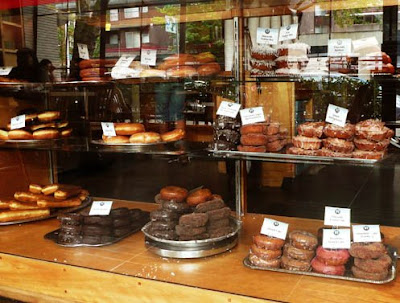 The day before we went, L. and I had spent an entire day walking all over Seattle, at least eight hours of walking. And the night before, probably because I'd had two large cups of made in Seattle coffee, I didn't get a single wink of sleep. Or it might have been because my body was thinking, Wow, I'm having so much fun! Do I really have to stop just to sleep?

So when we got there I was exhausted. But happy. And I got even happier when I discovered that the gift certificate left for us at the counter was double the amount promised! Thank you Top Pot! 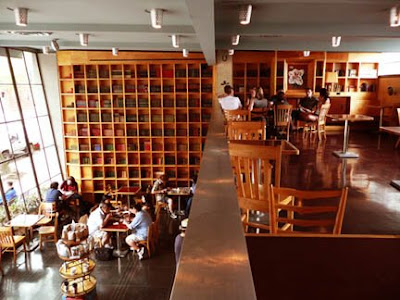 Alas, this being Sunday morning, there was no frying going on, thus no smell of freshly made donuts. But the donuts seemed fresh enough all the same. They were also delicious. And the coffee! Oh my God, the coffee... 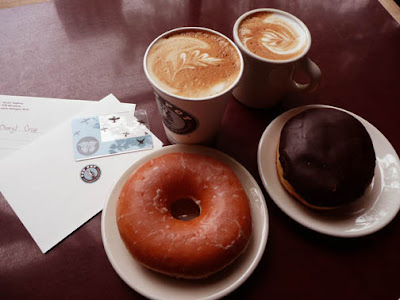 It was so good that just one medium double shot latte was enough to wake me up - and keep me up all day - even after a sleepless night. Could have been the massive intake of sugar as well, I guess. But I'd rather blame it on the coffee. 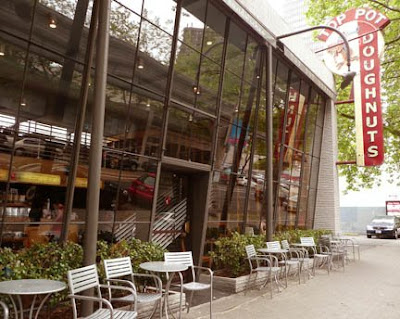 Of course Seattle had cafes everywhere. On Seneca Street, where our hotel was, we saw a Starbuck's every two blocks. Here's a non Starbuck's at the public market... 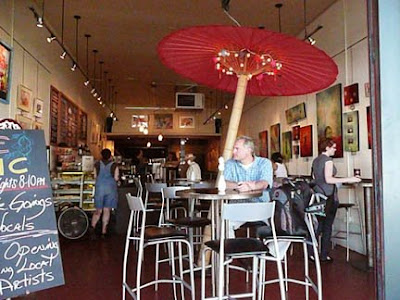 and a cafe inside a jewelry store! 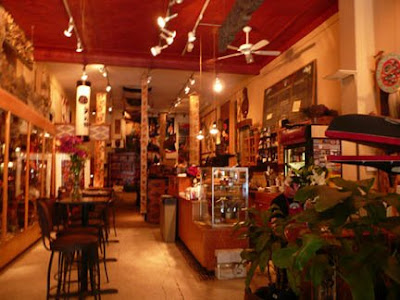 And a very happy cafe owner named Hans who moved to Seattle from Switzerland 50 years ago. 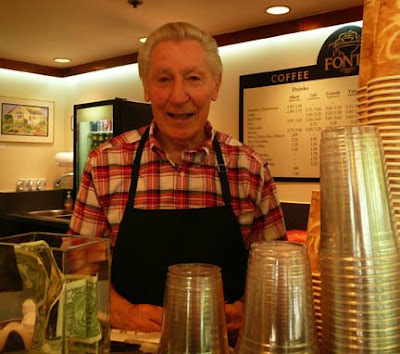 And we just had to visit the very first Starbuck's. The lady with the sunglasses and the short hair is the first lady of Taiwan. The blond woman in the black suit is with the US secret service. You can tell by how inconspicuous she is. 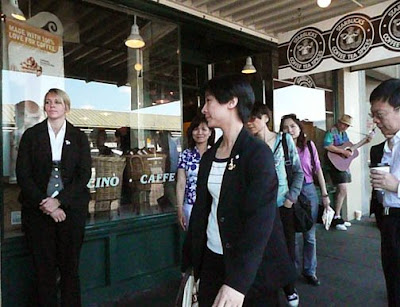 In fact she, along with two other black suited people standing in front of the cafe in that overly serious way they have is what alerted L. and I to the fact that something interesting might be going on. (Overseas, btw, my sister says you can always tell who the CIA operatives are. Secret they are not, unfortunately.) And they all kept giving us the you better not be terrorists look for taking so many photos. So of course we had to follow them to see where the first lady was going... 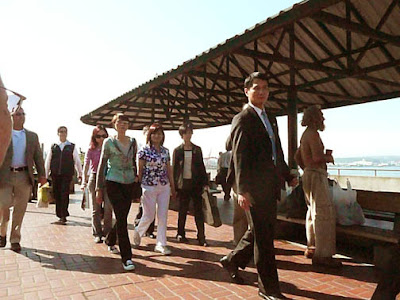 To appreciate the gorgeous view (for about two seconds). That's the way to travel, L. and I later joked, with a huge entourage, some to keep the riff raff at a safe distance, some to talk to, and some just to carry your purchases. Nice.