My current work in progress...

He called himself Lorenzo the Gigolo. He had a big, gruff voice and a friendly demeanor. I don't know his circumstances, but I guessed from the well worn look of his clothing and the way he wore his hat slightly askew, as if he rarely had need to consider his appearance, that he probably wasn't walking home to a house on a hill with three cars in the driveway. But he couldn't have been homeless either. He was unkempt but he was not unclean. Whatever his story was, he had cast himself in the happy, and perhaps even heroic role of Lorenzo the Gigolo, the sort of character who, more than likely, took enjoyment wherever he found it.
But how did that character look in his mind?

Not how he looked on the tiny screen of my camera, evidently. One glance at his grainy self and he said, Throw it away! 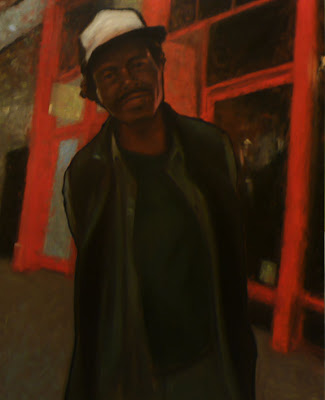 I didn't, thank God. I wanted to tell his story, one which is probably worth a novel, at least. But since he lives in Seattle and I'll probably never see him again a painting in which I can only hint at the sort of life that created a character like him will have to do. I can get setting and features well enough. Capturing humor and dignity and a sense of a life that, in many ways, has not been easy is far more difficult. 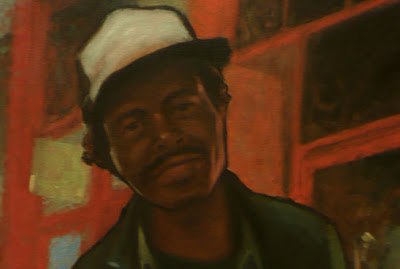 I had planned to finish the painting in a flat, comic book inspired style, with muted colors and a heavy use of outline. It's a style I've been experimenting with lately. But midway through the process, before I started on the background, I talked again with a Seattle gallery who may or may not show some of my work. They might be interested in my comic book inspired stuff. They'll need time to consider it. But, if I could do more work like this... 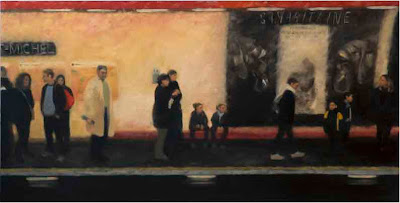 which currently hangs in a gallery in Sausalito, CA, where it has resided for the last two years. And, if this work should still be available...

I had seconds, a moment really, to consider two things:

1. Should I remain loyal to my gallery in spite of how disappointed I've been in their ability to sell my work? Will I be labeled as fickle - and therefor not worth the risk - in the fine art world? Or should I take back my paintings and offer it to this other gallery which, as far as I can tell, seems far better able to sell work in general? The afternoon I walked in there they'd sold five paintings the day before. Last I heard from my current gallery things were not going so well but they remained hopeful. And, from what I've heard here and there, I would not be the first artist to take back my work due to lack of sales.

2. Should I deliberately work in a certain style because a gallery feels they would be better able to sell works like these rather than to continue experimenting? How will this affect my natural progression as an artist?

Well, whatever I should have said, what I did say was, Yes! I will be glad to remove that work from its current space to instead show in their gallery. And, yes, I have many works planned in a similar style....

After that I took a very long walk where I happened upon these chalky bits of encouragement and direction, sidewalk art drawn by three young (?) artists... 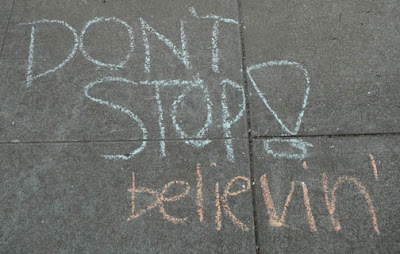 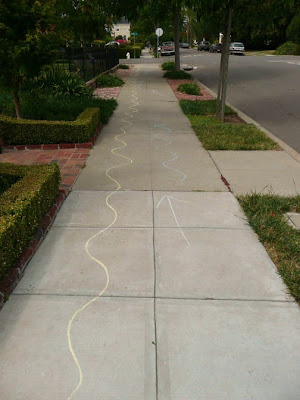 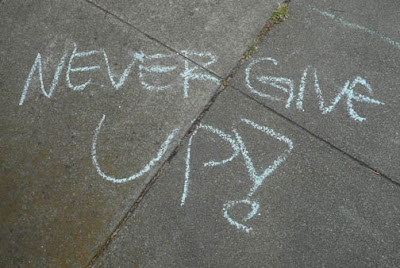 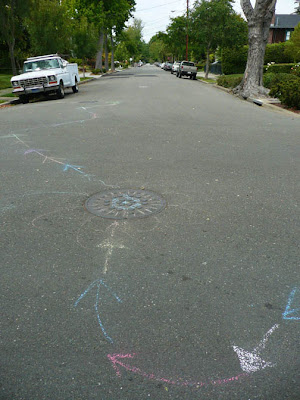 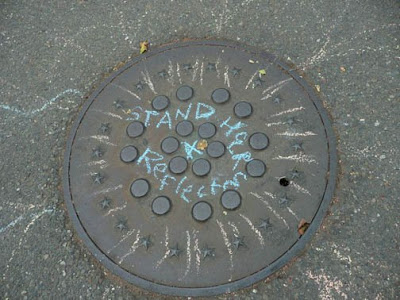 The next manhole cover (which I wish I'd taken a photo of) reads, Pause and sing a song. 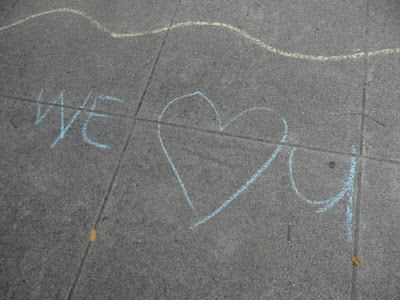 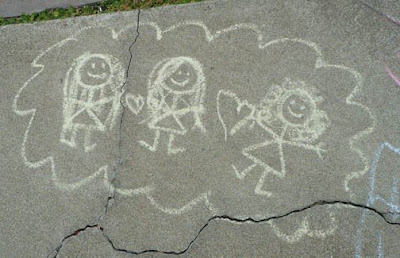 Back home, I worked until the wee hours to finish my painting. I was on a roll and didn't want to stop. But it still needs many more hours of work before I'll feel satisfied with it. Some things need correcting, others need to be brought forward, or to be toned down. And the background and foreground, since they were done in two different styles, need to be balanced out somehow.
A part of me thinks, sell out. Another part of me thinks, well, this is just another challenge. How to incorporate an older style with what I'm trying to do, whatever that is, now. And I'm tired of being a struggling artist. Oh, Lord, I can't tell you how tired I am of that. Lorenzo and I might have a lot in common. If this is a mistake I will deal with it. I will learn. If not I will say thank God I jumped at the chance.

But...working last night...I remembered what it is about that style I loved so much and still do. What I had been striving for was the sense of music translated into color and brush strokes, long soft passages flowing into quick staccato notes, people lined up on a platform, notes on a page, my hand playing the sounds quickly, evenly, then slowly, until it leaves the canvas....